Local food with a purpose
Olav will probably not tell you himself, but the local food concept around Thorbjørnrud Hotel is unmatched on both Norwegian and international scale. Where some have jumped on the local food trend, Olav has worked steadily with his long-term plans to create a stable and good business around the hotel operation, firmly rooted in a bigger idea than spicing up his hotel restaurant. For Olav, local food is all about values. An cow does not necessarily taste wonderful because it is from the neighborhood, says Olav, but we need to ask ourselves what kind of food we want to eat, and what kind of animal husbandry and cultural landscape we want.

Arena for dissemination
Olav has traveled to all parts of the country for several years, giving lectures on food and meal culture, agriculture, sustainability and animal welfare. By opening his farm to visitors, he wants to move the conversation home - and to surroundings that illustrate what he is talking about. In a world where tabloid opinions tend to dominate, Olav wants Øvre Kjekshus to become an arena for more nuanced talk about Norwegian agriculture, animal welfare and food production. But just so you know; if you want more party and less talk, Olav has the ability to adjust to his audience. 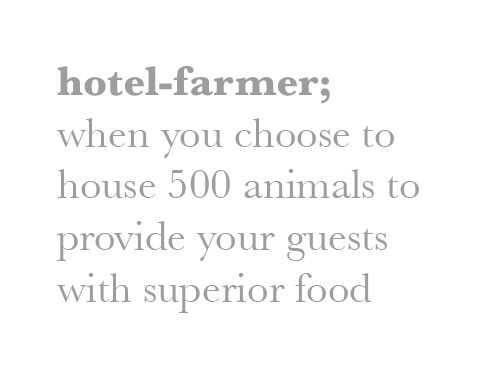